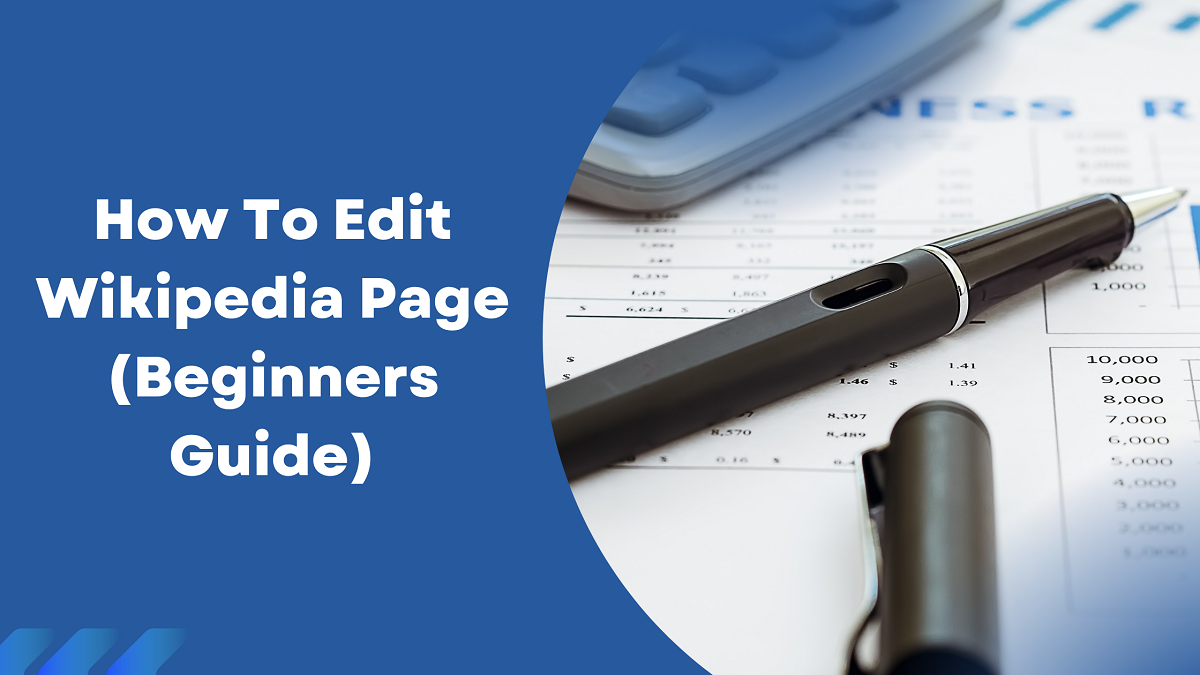 How To Edit Wikipedia Page For Beginners In 2022

Although there are many Wikipedia page editing services available on the internet. But you can also edit it on your own. Let’s read some tricks and the importance of Wikipedia page.

Is It Essential To Create A Wikipedia Page To Boost Your Personality?

Do you want to make your own identity or data about your business public because you're tired of reading Wikipedia? This instructive article is for you if you answered yes. Because producing a Wikipedia page is a well-informed decision, it ranks at the top of search engines.

A Wikipedia page dedicated to your firm, for example, would be a highly prominent venue for promoting your brand.

Your main concern must be how to construct a Wikipedia article for your company. It implies that Wikipedia writing services dedicated to your firm would be an important instrument for promoting your products.

The majority of Wikipedia pages are straightforward to edit. Wikipedia has two interfaces: traditional wikitext (wiki markup) editing with the Source Editor, and a new VisualEditor (VE).

The Source Editor for Wikitext Wikipedia page editing is selected by selecting the Edit source tab at the top of a Wikipedia page (or on a section-edit link).

The Code Editor interface gives basic menu choices to modify or update the formatting, and it opens an editable duplicate of the page with all the wikitext used there.

Wikitext is widely used in Wikipedia for things like hyperlinks, tables and columns, footnotes, inline citations, and special characters, among other things. Users can enable 'wikitext highlights' in the Text Editor, which utilizes various colors to aid distinguish article text from wikitext.

The Wikipedia team has created style rules to standardize the appearance of articles and data, making Wikipedia simpler to use as a group. The providing tools contain a basic list of wikitext.

An "edit toolbar" is given directly above the edit box (seen below), which enables logged-in users to instantly put and format certain sections of wiki code (by choosing the option in personal preferences). For further information, see Help: Wikitext.

Keep in mind that you can't break Wikipedia, and while there are numerous protocols, perfection isn't essential because Wikipedia is a continuing process.

The Significance Of Minor Changes

If the "small edit" box is checked, it means that only minor variations exist between the version with your modification and the previous version: typo/grammar fixes, styling, and visual adjustments, text reordering without changing content, and so on.

A minor change is a variation that the writer feels does not need to be reviewed and will never be contested. Only registered users have access to the "minor edit" option, which is one of numerous. Editors should not believe that labeling a change as small diminishes their editing efforts.

The Significance Of Major Edits

Although all editors are urged to be brave and strong, there are a few things a user may take to guarantee that significant modifications go successfully.

Before making a big edit, a user should talk about their ideas on the article's discussion/talk page. When editing for a lengthy period of time, the in-use tag might help lessen the chances of an edit dispute.

Following the completion of the modification, include an edited narrative to help document the changes. These methods will assist everyone in ensuring that large modifications are accepted by the Wikipedia community.

A big edit should be double-checked to ensure that all involved editors agree on it. As a result, even if the modification is a single word, any modification that changes the interpretation of an article is substantial (not minor).

When conducting large revisions, there are no compulsory requirements to agree to, but the preceding guidelines have established best practices. It's possible that if you do things your way, your modifications will be reedited.

It is recommended that you regularly copy your adjustments into an external text editor before hitting "Publish changes" while doing a major edit (preferably one without formatting, such as Windows Notepad).

Sources are usually put after the information they support, at the conclusion of the phrase, and before any punctuation.

Wikipedia writers are free to use any citation system that enables the reader to recognize where the material originated from, and inline citations are strongly encouraged. Footnotes, abbreviated footnotes, and contextual references are all common ways to include inline references.

Inline references are most typically made by putting a reference between the ref>... /ref> tags in the article's content. The reference is a footnote that appears as an inline link to a specific item in a collated, numbered list of footnotes, which may be found whenever a reflect template or references /> tag is present, commonly in a section headed "Citations" or "Comments."

If you're establishing a new page or integrating references to one that didn't have any before, don't forget to use this display markup to include a references element.

There are a variety of tools to assist with citation insertion and formatting, some of which are internal applications and programs and others that may be found on other websites.

Please read Wikipedia's notability guidelines before establishing a new article. In other words, an article's topic must have already been published in respected print-based sources, such as books produced by major publishing houses, newspapers, periodicals, peer-reviewed scientific journals, and websites that fulfill the same standards as respectable print-based references.

How To Edit Wikipedia Page For Beginners In 2022

Wikipedia Costing Structure And Approach In A Nutshell

What Are The Several Things You Can Do After Creating A Wikipedia Page?

Wikipedia: How To Create A Page & Why?

How Long Does It Take For A Wikipedia Article To Be Approved?